skip to main | skip to sidebar

Escargot is Not Just for Eating: A Hopscotch Game 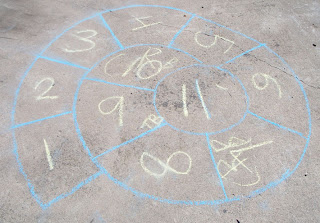 Setup: Draw a circle in the center of your space, large enough to rest both feet in. Then, draw a spiral line wrapping around it. You can vary the length of your spiral according to your child's age and skill level. Divide the spiral line into squares and number (or letter) them. The outside square is the first number, and the circle in the middle is the last number.

Game Play: Each player takes turns hopping on one foot from one square to the next. You may only put both feet down in the inside circle, where you turn around and go back to start. If you make it through the escargot spiral without mistakes (What you count as a mistake should vary according to your child's skill level. With my four year old, a mistake is stepping in someone else's box. An older child could try not to step on the lines, etc.) then you get to put your initial in a square of your choosing. You are now the only player who can step in that square, everyone else has to jump over it. The game is finished when all the squares have been initialed.

Other Info: My four year old loves this. We are almost out of chalk (and large areas to write on) because he wants to play it so often. He is not very coordinated, so this is a great activity to help with that. Also, if your child is still learning numbers or letters, connecting a physical activity with the learning will really help them. This is the way the French play hopscotch. Escargot is French for snail. I got the game from a book called Hopscotch, by Elizabeth Dana Jaffe.
Posted by Tabitha at 10:36 AM

Tabitha
I am passionate about children and education. I have a degree in Elementary Education, with a specialization in early childhood, and ten years of experience teaching children. My most important experience, however, has come from playing with my four year old and one year old boys!